(Japanese: クリプトバース Shuriken Brawl Cryptoverse) is a Japanese shounen manga series written and illustrated by 国貞藤間 Fujima Kunisada in Japan. It was serialized in BangBang Comics from Issue #5 (February 6, 2021). The series is about a young boy named Koji Kiyoshi, who embarks on his adventures and training to become the Master Champion. The series uses a monster-and-human fusion concept, but included newer concepts to make the series interesting to the audience. The original manga is also available online at the same time as it was released in the BangBang Comics magazine in its orignal website and Pixiv.

The title, Shuriken Ranto Cryptoverse, was created because the author, Kunisada, included the word, "Shuriken" to indicate that the main character throws Shuriken to attack, and the word, "Cryptoverse", is a portmanteau of "cryptocrystalline" (English-to-Japanese transliteration) and "universe", so it would be cryptocrystalline universe. The series can be sometimes abbrieviated as "SBCr", or "Kuribasu".

Whenever the Crystal Monster and the Crystal Brawler battle together, the Crystal Brawler uses the Crystalrist in order to fuse with the Crystal Monster, which they both take on the human form. The series has yet to be released in North America (despite several fan translations, including the unofficial English Version published on Webtoon Canvas), but it wasn't confirmed yet. The series was release in Japan, but it is quite unknown if it will ever release in other countries and languages as well. So far in the franchise, Shuriken Rantō Cryptoverse have 2 volumes released so far and 35 chapters in total.

The concept of the manga dates back to 2018. Ever since he was a child, Kunisada has enjoyed reading shounen manga. Ever since the first video games have came out, he has always enjoyed playing them, and it has also been his hobby ever since. He grew fond of the franchise, and drew out his own creatures and call them, “Crystal Monsters” and the characters with inspiration that he saw in the games, manga, and other media. Kunisada was also good friends with Maruko Jinko, and he has a good idea on creating a manga series. 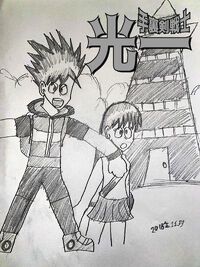 The reason why he was sent to the Star Tribe was because legends say that anyone holding a rare Sharp Heart can be able to save the world, which Koichi was holding the Sharp Heart. He appears to be accompanied by a girl without a name (a prototype of either Sora Nijiko or Aoha Atashino), who also appears to be his childhood friend, and sometimes a geeky friend. The task of Koichi and his friends are to gather all the 20 orbs around Japan, and Koichi's goal is to search for his father. After they have found the 20 orbs, they will be granted access to the Dojo Tower. Koichi have won after he defeated the master with his Shuriken Techniques. Koichi would find that his father was the top Champion of the Dojo Tower, so he convinces him to come back to his family. The ending of the series would be that he becomes a Master of Shuriken. The ending also states that Koichi and the unnamed girl married in the future. However, the idea was scrapped in early 2020 before it was even finalized.

The idea for The Shuriken Warrior Koichi was scrapped later from the final piece because Kunisada wanted a more science-fiction genre, and realized that the traditional vibe does not suit well with him. However, before he offered Kunisada a series that he could work on, Jinko was sick and is unable to continue the series, so Kunisada accepted an offer to create his very own series. Kunisada's names for the manga series went by just Cryptoverse, Cryptoverse Adventures, and Cryptoverse Brawling Heroes. However, these titles are also scrapped before he came up with a final title. He came up with the name Cryptoverse for the part of the title because he have familiar interests with different cryptocrystallines.

The series finally came by, under a completely different title, which was called Shuriken Rantō Cryptoverse, which have taken months for Kunisada to come up with. He revealed the logo for the upcoming manga series in June 2020, but he didn't even created a chapter or characters yet. He did revealed the logo, but for unknown reasons, it was changed on October 2020, with a more "rounded" style, in a different perspective and format. However, this series was meant to be the sequel to the previous series. However, Kunisada stated that he wanted the story to have "characters explore the world around learning more about life than adventure". Kunisada has created the characters, Koji, Saburo, and Sora, in December 2020 before the start of the series. Kunisada also stated that he really enjoyed playing the games all of these years that he have decided to make the series of his own, bringing the elements, and "turning them around to a new direction". In January of 2021, a month before the series' debut, Kunisada have already designed the very first page of the manga, which appears to have a slightly different design than the rest of the chapter covers, under a different name. However, that wasn't changed in the finalized version of the manga. After releasing Chapter 1 on BangBang Comics Issue #5 (2021), he thought that the concept for fusing was to make the series better. 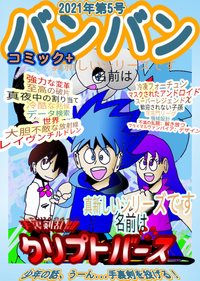 Before the series was even released in the BangBang Comics magazine, which it was approv before, Kunisada have thought about different ideas for the manga series. At first, the story might begin where the main character Koji went over to befriend everyone at his new school, but since he doesn’t have a Crystal Monster yet, he gets made fun of. The rest of the first idea is left unknown, which is why Kunisada wanted to start off introducing the Crystal Monsters, and the rest of the backstory of the Crystal World within the story. However, that didn’t get into the final piece of the manga.

Kunisada’s last idea was that Koji’s mother assigned him to Crystal Brawlers Junior High School, in which Koji is excited to go there. He thought that he should end the first chapter with Koji and Roakijushiku winning the battle against Darkslash, but instead he have made them lose the battle for some reason. The character outfits have to be altered, and their personalities also have to be altered. By the time the series was released in BangBang Comics in the fifth issue, many fans have begun to go through the series as they enjoy reading it. From that point forward, Shuriken Rantō Cryptoverse have continued. The series went on it’s first absence on June 12, 2021 in the 23rd issue of BangBang Comics.

So far, there are two story arcs, with the first saga currently running.

Community content is available under CC-BY-SA unless otherwise noted.